Skip to content
Nepal, beautiful land full of wonders and amazing and natural things. Even being very small in size, Nepal has such an amazing, interesting, and fascinating geographical variation. Due to these humongous variations in the landscape and climate condition of the country, you can find here so many kinds of forms of life in the country within the small area of 1,47, 516 sq.km.
There are still many unknown and unbelievable geographical facts about Nepal that are still uncovered to the rest of the world. Besides several unknown facts about the geography of Nepal, there are a number of things that are only found in Nepal. You can’t see or find these things anywhere in the world except Nepal.
In this article, you are going to know about one of those things that are found in Nepal only. We are going to talk about the some unknown facts and the evidence of the existence of Yeti in the Himalayan religion of Nepal.

What Really Is The Creature: YETI???

If there is a mystical creature that has always fascinated the human imagination, that is the Yeti. The two-legged massive ape-like animal exists more in the myth and legends in real life. But the series of pictures released by the Indian army has challenged the belief a bit. 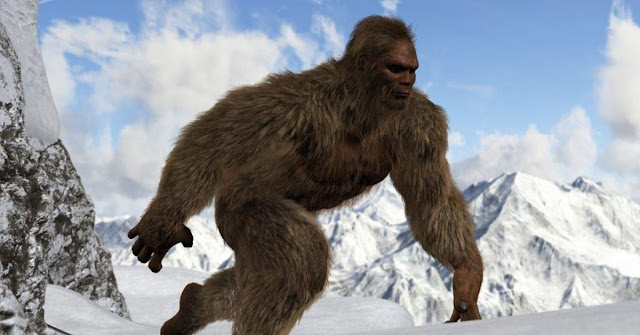 During one of their mountaineering expeditions, soldiers spotted large mysterious footprints in the snow close to the Makalu Base Camp of Nepal. The army claims that they point out the existence of Yeti, a mysterious ape-like creature that lives in the Himalayas.
Yeti was first mentioned in the Nepali folklore and is popularly known as Abominable Snowman. It is an ape-like creature taller than an average human and is said to have Inhabitat in the Himalayas. Yeti is also referred to as Meh-Teh by the locals which means Man-Bear. The Yeti, also known as the Snowman, is a legendary creature having Inhabitat in the Himalayan regions of Nepal and Tibet. The word “Yeti” literally means that it is a creature that resembles the appearance of both humans and a bear. There are many names for the Yeti, one is the Abominable Snowman, another one is the Metoh-Kangmi which means man-bear snow-man. In China, the yeti is known as Yeren or wild man.

Historical And Mythological Belief About Yeti

Yeti is a part of the history and mythology of Nepal and is the pre-Buddhist belief by the several Himalayan people. Even the Sherpas who live in the higher mountainous region of Nepal always believed in the existence of Yeti and have passed down several stories of the Yeti from one generation to the other. 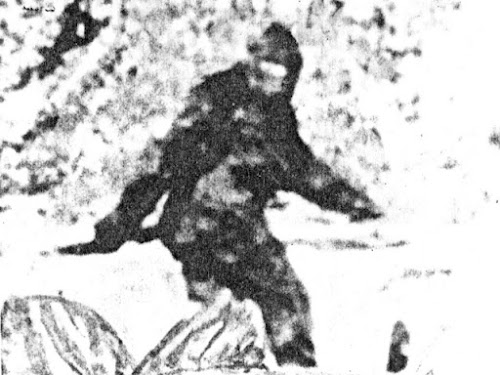 It is believed that the people of Himalayas especially, the Lepcha Community used to worship a Glacier being having the same appearance as Yeti as a God Of The Hunt. These people believed this creature is their god that helps them in hunting other animals and creatures in the Himalayas.
The history of Yeti became part of local traditions about 350 years ago in the Himalayas of Nepal. The first Yeti footprint was found in the Himalaya when a holy man named Sangwa Dorje took up residence in a cave near the remote village of Pangboche village above the famous route of Everest trekking.
In the 19th Century, Yeti also became a part of popular culture and was depicted in films, literature, music, and video games. Yeti has been most popular in the western pop-culture as the name of Abominable Snowman.
The Yeti is part of Nepali folklore and is said to live in the Himalayas. Tales of the hairy creature roaming the snowy caps have captured the imagination of many including New Zealand’s mountaineer Edmund Hillary. Sir Edmund Hillary carried out the skull from Khumjung village to America for an examination with a study in 1960. The footprints, the skull and the stories the local tell make us sure that it is not imaginary.

Shreds of Evidence Of The Existence Of Yeti In The Himalayas

There has always been a healthy debate on the existence of the Yeti in the high Himalayan regions of Nepal and Tibet. Even after having a debate on this for so long, there are still two groups of people on this, one believes there is the existence of Yeti while others believe that Yeti is just a misidentified wild creature of Himalaya.
The interesting thing is neither of these groups of people has able to prove their points with sold proofs. We gonna talk about the evidence that supports and favors the existence of Yeti in the Himalaya regions.
–There is a symbolic head in the Museum of Khumjung village of Nepal. The skull is there and has allowed seeing travelers. Everest trekkers can visit Khumjung Monastery with its scalps. Yeti documentary video has made in Nepal. Sherpa people believed the mysterious creature lives in Gokyo and Rolwaling valley in Nepal. Trekkers, climbers, mountain people often narrate the story 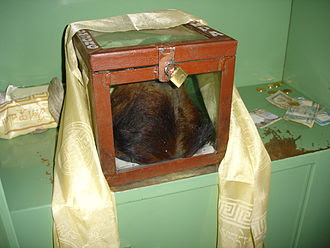 –The key evidence for the existence of the Yeti was the photo of a footprint taken by British explorer Eric Shipton in 1951. The photograph was taken on the Menlung Glacier, west of Mount Everest, on the Nepal-Tibet border. 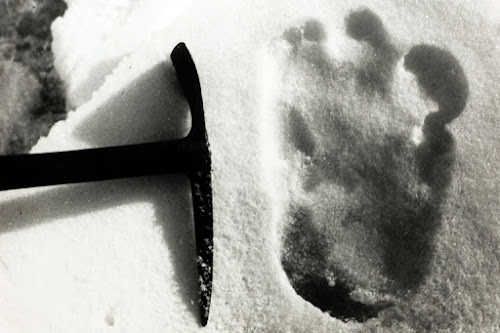 -A team of Japanese adventurers says they have discovered footprints they believe were made by the legendary yeti said to roam the Himalayan regions of Nepal and Tibet. According to Yoshiteru Takahashi, the leader of the Yeti Project Nepal the footprints were about 20 centimeters long and looked like a human’s.
-Photos of the footprints of Yeti taken by Frank S. Smythe in 1937, which was even printed in Popular Science magazine in 1952. 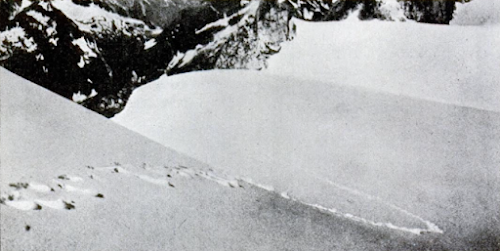 -In the past 19th Century and 20th Century, several trekkers had described the sighting of mysterious ape-like creatures in their journals. In 1832, James Princsep described in his Journal Of The Asiatic Society Of Bengal that his guide spotted a tall bipedal creature covered with long dark hair. Similarly, in 1899, Laurence Whadell also described the footprints left by an ape-like creature in his journal named Among The Himalayas.
-Even India’s army has claimed they’ve found footprints belonging to the Yeti. For the first time, an Indian Army mountaineering expedition team has sited mysterious footprints of mythical beast Yeti. The footprints allegedly measured 81 centimeters by 38 centimeters and were seen close to Makalu Base Camp. The snowman has been spotted in the mountainous area between Nepal and
Tibet. 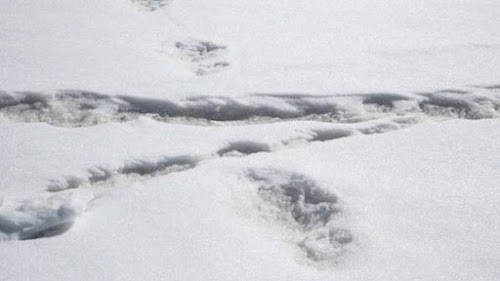 Evidence Of Yeti By National Geographic Channel:
These are some of the evidence that supports the theory of the existence of a giant ape-like creature called Yeti. All the time the photographs of the footprints were released by someone, due to enough evidence, those footprints were compared with either bear or other big sized animals.
Besides this evidences, several efforts were made to attract Yeti. The experts say that Yeti is a shy animal. It runs away from seekers to higher and higher mountains. Six trained foresters armed with high-powered binoculars and telescopes keep a vigil round the clock for Yeti to come to the National Park. The Chinese have failed in their efforts to catch Yeti in Tibet where it was said to have been spotted in 1969. They have failed in their efforts to catch a Yeti in Tibet. There have been some reports about Yeti. A yak weighing over 500lbs was found thrown about 30 feet from where it was tied and there were no marks of feet dragging. No other animal except man possesses feet like Yeti. It is very intelligent and can learn to talk easily.

Scientific Explanation On The Existence Of Yeti

Since, this is a topic that has fascinated the human’s imagination for a long time, the involvement of Science is obvious in explaining the mysterious topics like this.
All the initial myth about Yeti took a definite shape when mountaineers started exploring the Himalayas. Since the 1920s several trained mountaineers ventured into the Himalayas to find out more evidence and information about this creature Yeti. They came back with many stories of Yeti sightings but never with any concrete pieces of evidence of its existence.
But many people stills claim that they have seen a giant ape-like man walking through the high mountains although there is no documented proof. So due to the lack of solid and concrete proofs and evidence, scientists believed that Yeti is no more than a misidentified wild animal. But the newest sets of pictures released by the Indian armies raise questions about the existence of Yeti once again.
Same as the Ocean and the Space have many unsolved mysteries, there is this mystery about the existence of Yeti in the Himalayas also. The higher regions on the entire planet Himalayas is also full of mystery and mysterious things. Yeti is also one of the mysteries on the highland of the Himalayas. Same as like other mysterious things the existence of giant ape-like Yeti is also the same that can neither be directly denied nor accepted. Either YETI is the myth or mystery, Yeti is a monstrous snowman living high in the Himalayas Of Nepal.
Give us your support by sharing the article with your friends!!!
Share If You Like!

Things You Should Know About National Anthem Of Nepal

Know About Census Of Nepal, Its History & Methods

Lok Dohori In Nepal And Its Significance